Personal blog with an emphasis on microcontrollers, computing, and other hobby projects.

We’re in for some big changes in the area of desktop computing. The desktop personal computer has already disappeared from the homes of many; replaced by a laptop. For the majority, most functions of the laptop can be replaced by a tablet, and it’s easy to use touch based UI. But what about the desktop PC? Is it even needed? Could a touch based UI ever work on a desktop computer?

Who Needs a Desktop Anyway?

Anyone who does real work using a computing device for 8 hours a day. Examples are software development, video editing, graphic design, number crunching in Excel - all are tasks which are made better for using one or more 24” monitors. Can these users and their applications adapt to a touchscreen world?

The Catch-22 of Touch

There is no doubt that the two major desktop operating systems vendors, Apple and Microsoft, are steering us towards a touch future. Apple are moving OSX into line with the iPad, with the new full screen mode and reverse-scrolling of screens. Microsoft’s Developer Preview of Windows 8 is ‘touch-first’ with it’s Metro-like UI.

These moves don’t mean the transition to touch will be easy. There are significant hurdles to overcome.

There are a few touchscreen Windows PCs on the market, but the touch is an afterthought. It is not physically possible to use current touchscreen monitors for any length of time. They stand on the desk in a vertical or near-vertical alignment, at nearly arms length. Using these screens for any length of time will result in increased cases of musculo-skeletal injuries of the upper arm, shoulder and neck.

Applications are written with a mouse in mind. The user interface has changed only slightly since the first windowed operating systems. We see fairly static screens with every conceivable option crammed onto the screen at once. Menus have become ever more conjested, and toolbars of icons have become unusably cluttered. Canonical have seen this problem and ditched the menu from apps in favour of a HUD in Ubuntu 12.04 (YouTube). For a touch device, the icons are just too small and too densely packed. A radical redesign is needed to make complex apps work with a touch UI.

Ditching the mouse will be harder than adopting it (image courtesy http://www.e-tech.ca)

We need to give up our beloved mouse. But this move away from the desktop rodent is going to be a bigger shift than the move from text-only PCs to windowed operating systems in the late 80’s. I can still remember having conversations with a die hard SuperCalc user who was convinced that colour screens, the mouse and a windowed environment brought no benefits, and that they wouldn’t catch on. Now he happily uses colour to highlight specific data in Excel, and opens windows side by side, and drag and drops with the mouse. Similarly, there are many users now, who believe the mouse is here to stay.

So, for desktop touch to catch on, the hardware and the software need to be ready, but manufacturers are not keen to invest in the area until desktop touch catches on. But users will never adopt touch without much better designed hardware and software. Catch-22.
As a result we’ll likely see sluggish adoption of Windows 8, once users realise it is the worst of both worlds. Just like Windows 1.0 and 2.0 faced resistance during the text-only years, it will not face mass adoption.

Putting the Desktop back into Desktop Computers 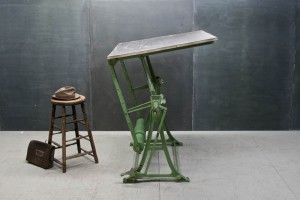 It doesn’t take a lot of imagination to picture a 30” x 40” multi-touch screen in place of the top surface of a drafting table. The key feature of these tables is their adjust-ability. They can adjust for tilt. They adjust for height, often with a big enough range to allow for working sitting or standing. This is a screen you can rest your forearms on when required (without the touch screen going crazy). 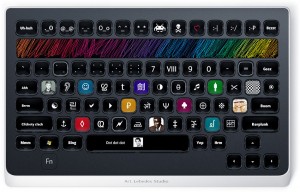 For plain text entry, nothing as yet beats a real keyboard - so I envisage an ergonomic keyboard of around 70 keys, built into the lower edge. The keyboard would not tilt with the rest of the surface. The less used options of a traditional keyboard will be put on the touch screen. Ideally the keycaps of the keyboard would each be a mini LCD or eInk display like the optimus popularis, so they can adapt to the application’s needs. Despite the naturalness of touch, keyboard shortcuts will feature heavily in the OS and applications. Keyboard shortcuts are already making a comeback on the web, and will reduce the amount of arm waving for many tasks.

Such an integrated desktop solution will likely need to come with a chair designed for this new way of working. We’ll be much more mobile at our ‘desks’. Gone will be the micro-movements of the mouse and it’s single slow pointer. When we can use both hands, we’ll need to be able to comfortably lean forwards in our seats to reach the top of the screen, or lean back and use the keyboard. Standing up may become a normal way of working. Drafting chairs are often no more than bar stools for perching rather than the huge padded ‘executive’ style chair we see today. This extra movement could be a good thing for bodies too.

Until we all have one these truly ‘desktop’ computers, there will be pain.

There will be physical pain we try using a classic touchscreen monitor instead of the mouse.

There will be mental pain flitting back and forth between designed-for-touch apps and designed-for-mouse programs on the same computer. Just try the Windows 8 preview if you need convincing of that.

There will be pain for software developers as they realise they have to do real usability testing as part of their design. Lumping every conceivable program option into a menu and onto a toolbar is not design. They will need to design fluid, context aware user interfaces that constantly adapts to what the user is doing. It’s been done on various iPad apps. The challenge is the big programs such as Photoshop, Visual Studio, or Final Cut Pro. It’ll need a lot of thought.

There will also be pain for hardware manufacturers who lose sales to tablets, and are too fearful to innovate in the design department.

Apple to the Rescue

I believe the only company with the guts to pull of this kind of computing revolution is Apple. A future iMac could be more iDesk. A large piece of furniture with the styling of an object d’art and a heart of silicon. The whole experience will have to be carefully designed - exactly what Apple is so good at.

As long as they haven’t tried to patent the design of a drafting table (which wouldn’t surprise me), others will follow - cautiously at first, and then we’ll see generic ‘desks’ able to run Windows or Linux. Different shapes and sizes will appear. Geeky ones with hidden LED arrays, flat pack IKEA inspired styles, retro and vintage designs. These will need to be upgradable - and we may unfortunately see a return to proprietary upgrades to keep revenue flowing.

It will be interesting to see how this pans out. But I suspect it will be a longer time frame than the change from text-based operating systems to windowed.
The PC may disappear from a great many homes, but in our places of work, including our home offices, the next few years are going to see a revolution in the design of the desktop PC - and it’s long overdue.