Personal blog with an emphasis on microcontrollers, computing, and other hobby projects.

This is a little diversion from Rust on the STM32. My nephew has been doing some Python at school, and also had a project in mind for an ESP8266/ESP32. I had a couple of spares, so it’s time to flash MicroPython onto them and have a play.

It is worth noting that using microPython on a board like the ESP32 is not a well polished experience. It may be worth going for a more expensive board that was built with microPython in mind, or going for the even more polished CircuitPython.

Setting up your host PC

Flash MicroPython onto the ESP32

Reference (and additonal info if things go wrong): Getting started with MicroPython on the ESP32

Using Putty to Connect to the REPL Prompt

After initial setup, the only way to get a REPL prompt is over a serial port. This is where Putty comes in. Putty can be used for various types of connection to remote devices and servers, but we are just interested in the simple case of a Serial connection. 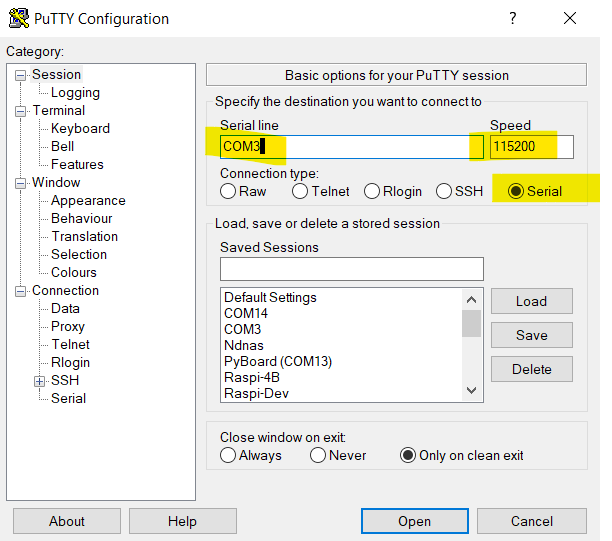 Once connected you should get a REPL prompt in your Putty session.

You can mess around in REPL getting WiFi to work, and this is good for testing stuff out, but you’re going to want those WiFi settings to run when the board starts up, so for this you need to write a boot.py and be able to upload it.

The tutorial at docs.micropython.org are excellent. From this point I would skip straight to tutorial/network_basics to learn how to do stuff with Wifi. They do everything in REPL, but if you want something to happen at every boot of the device, you should add it to boot.py

NEXT: Setting up your dev environment and writing some code